By Trevon Barnes, The Ohio State University, Class of 2018 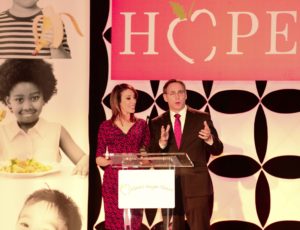 Dr. Davis commanded the stage and the attention of 700 attendees with unrelenting charisma as he shared his moving, yet mildly humorous rags-to-riches story that began with him living in a food-insecure home as a child. His words resonated with the audience as he shared eyebrow-raising phrases such as, a visit to the local fast-food restaurant was like “going to a steakhouse” and “I didn’t even realize I was poor as a kid; I didn’t choose to be born into poverty.”

Born in a neighborhood where drugs and crime negatively impacted families, a young Sampson Davis was fortunate to become a statistical outlier who was able to continue his education without falling victim to the streets or the school-to-prison pipeline that had trapped many of his peers. An act of fate while cutting class with his close friends one day led their curious minds into a health seminar that changed the rest of their lives. There, the three young men made a pact that they would become doctors when they became adults. From tribulation to triumph, Dr. Davis earned his way through college, finally able to indulge in a meal plan; his first access to stable meals. During his college years, he was able to forge a connection with a professor who took him under her wing. Even through medical school, his professor continued to be an integral part of his academic and professional career. 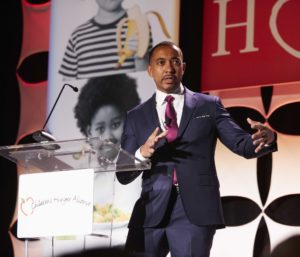 Dr. Davis’ story highlighted the positive impact and life-changing effect supportive community can have on an individual – whether from peers, mentors or anyone who cares to meet the needs of an at-risk child. Attendees at the event left knowing their contributions can make a difference in the life of a food-insecure child – having helped provide meals – and hope – for Ohio youth.

By the end of the event, nearly $28,000 was raised via the text-to-give donations, surpassing the donations made at the prior year’s event. That money will help provide more than 80,000 meals to the 1 in 5 Ohio children living in food insecurity.